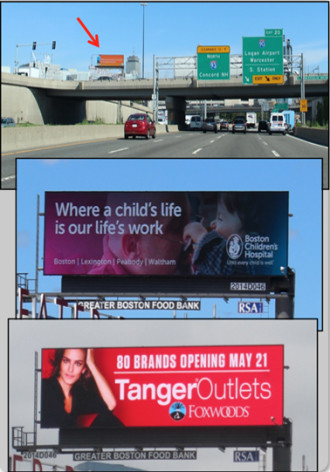 This is the only high-resolution digital unit in Boston and one of the most visible billboards on the Southeast Expressway, I-93, in Boston. This left-hand read for traffic heading into Boston is not only visible from the Southeast Expressway but also from the arteries that cross over the Expressway, such as the South Boston Bypass Road and the General Pulaski Highway. The read time here can be an extraordinary several minutes during the bumper to bumper traffic that is generally present on the Southeast Expressway, I-93, at this location. The board is located at the Great Boston Food Bank and a substantial portion of advertising revenues on the board goes to support this worthwhile charity and its mission to end hunger in Eastern Massachusetts.